We traditionally turn our buck in with our does to breed October 1st so we will have kids in March. It is a good time of year to have kids here. It is usually not too cold and some of the grass is starting to come up and provide some fresh green forage for the does when they begin producing milk. We have had some accidental births at odd times of the year due to unplanned breeding, but our preference is to breed according to our schedule. This is another one of those things that is strictly a personal preference. Many people do things differently and we all have our own reasons for why we do things 'our' way. This is how we do it.


A doe will normally come into standing heat for one day out of 21. It is the only time she will breed. The average gestation for a doe is 150 days. I have had some does that kid at exactly 150 days and some that go until 155 days. This kind of information is only gained with daily observation of the herd and good record keeping. We don't always know when a doe has bred, but there are usually signs that let you know she is coming into or out of heat, which makes an approximate date available. Keeping good does for a few years will also provide information about gestational tendencies. I had a doe that consistently went for 155 days except for once when she had quadruplets. Then she only went for 153 days, still 3 days beyond average. 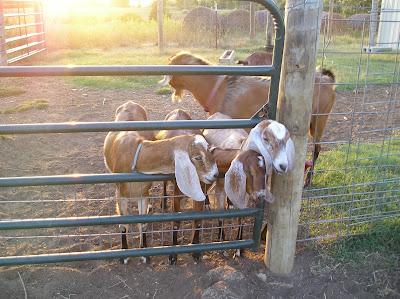 We attempted to breed two of our four does in July this year so they would kid in December. The other two we planned to breed in October for March kidding. This would keep us in milk year round instead of having all of the does dry up in January. We will find out over the next three weeks if anyone bred in July, but I don't think so. At least we didn't have any indications that they did.


A few days ago Velvet came into heat so we went ahead and turned Theodore, better known as Teddy, in with the does. Frank named him after Theodore Roosevelt. Teddy is a three year old buck we bought this past spring. He is amazingly easy to handle and will walk anywhere lead by his collar or a leash. He is also a nice, big goat that could add some size to our herd.


The problem is twofold with Teddy. When we turned him in with the does in July he became more aggressive to us by trying to push on us. Not butt us, but push us around physically. The next problem was he didn't like Pearl, our Great Pyrenees. At first he kind of avoided her, then he started rearing up like he wanted to butt heads with her, like goats do. Pearl started staying out in the pasture instead of sleeping in the barn with the goats which was her customary spot. Then one day when we went to feed, Teddy butted Pearl and smashed her into the birthing pens in the barn. That was not a good day for Teddy. That was when we decided his days were numbered. We will use him for this breeding season and when all of the does are bred, he will be leaving.

I keep a document with a table to record dates of breeding and estimated dates for kidding. I always hope I don't need to record a second or third breeding. We had a doe that bred again for the last time, finally, on Christmas eve. I don't know why it took her so many times, sometimes it just happens that way.

As the does breed I will add dates to the table. We wait to see if any does breed again after 21 days to make sure everyone 'took' before we remove the buck. I have read that some people only put the doe and buck together for a few hours then separate them. I know others that run their herd together all of the time and the kids are born throughout the year. It is all a matter of preference and what the purpose is for the goats.

It would be great to have our breeding completed in the next 30 days. If all of the does come into heat and become pregnant during the first breeding, it will be time for Teddy to go and just about time to butcher the three wethers we have. Then for a short period of time we will be down to four does. Then comes kidding season, which is a great time of year. And that means spring is coming and it will be time to plant the garden again.

It is a good seasonal life with something going on during each part of the year. No two years are quite the same and there is always something new to be learned. Enjoy the last vestiges of summer as we slide into the cooler fall weather. The leaves will be changing here before we know it.