How Does the Garden Grow?

We have just about decided this is our best garden ever. We had a very cool, wet spring with several late frosts, which was better than the last two very hot, dry springs followed by extreme heat and drought. The weather this year has made everything a little later, but more productive so far. We have high hopes for our harvest.

Here is a pictorial of the garden so far this year. 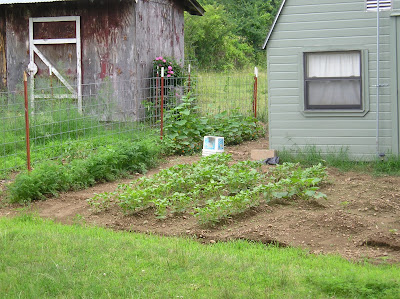 Carrots, tomatoes and cucumbers on the trellis to the left, purple hull peas in the middle and the mounds to the right are sweet potatoes 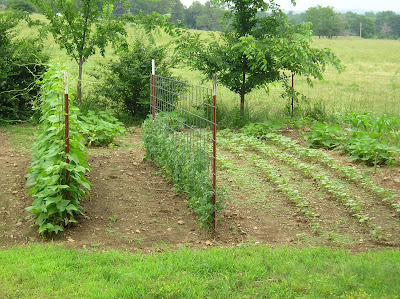 Pole bean on the trellis to the left, sweet peas in the middle, squash behind the beans and to the right of the okra that is just coming up 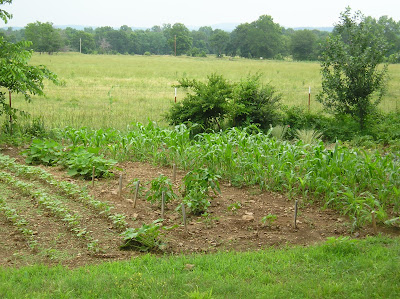 Okra, squash, peppers in front of the squash, corn to the right 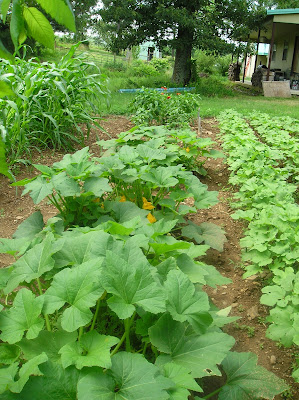 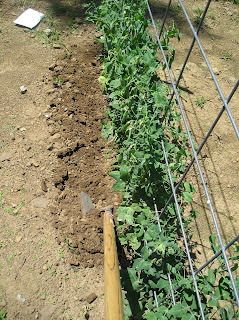 As the peas started winding down, I planted Romano green beans.

The sweet potatoes are starting to grow. 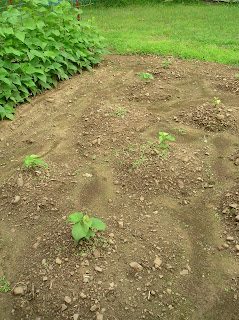 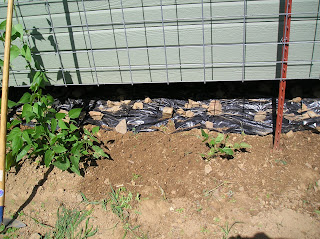 Only half of the lima beans came up, so I planted some more. 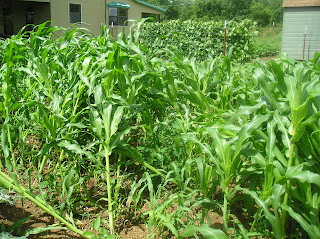 We had some wind that bent some of the corn over, but it is growing well.

July 2013
The weather is hot and dry now (today it is 105 degrees), but with our watering everything is producing well. The cucumbers and tomatoes are on the trellis in the background, in the middle are the purple hull peas, sweet potatoes and a mutant volunteer squash from last year. It is some kind of cross between a white scalloped pattypan and one of the winter squashes we grew last year. 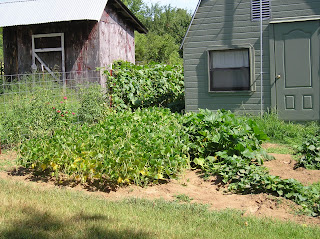 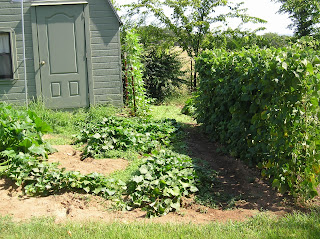 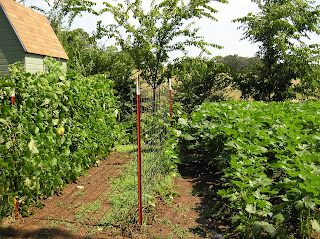 Green beans again and the trellis where the peas were. The Romano beans I planted didn't come up very well and need to be replanted. I'm not sure if I will get to that or not. The squash is back behind the okra and beans. 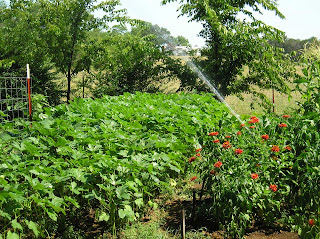 The okra on the left is starting to produce well. The red flowers are volunteer zinnias from last year. We have them sprinkled throughout the garden which is wonderful. Amongst the zinnia are the peppers which are starting to put on very well. We planted cayenne, jalapeno, anahiem, paprika, and a couple of sweet peppers. They are great with the soft goat cheese we make. 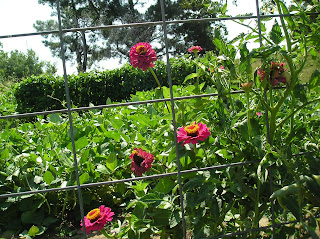 More volunteer zinnias and the tomatoes. Our tomatoes aren't doing very well this year, but that is okay. We don't eat very many, but I do want to make some salsa and tomato sauce, so we will see how that goes. 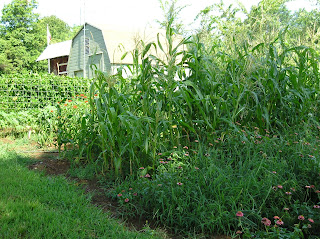 The corn is over six feet tall in places and growing ears. We hope to be able to eat some in the next week or so. 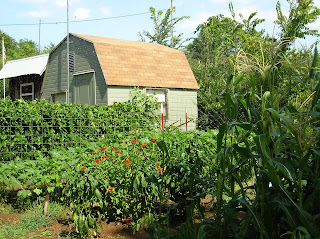 As you can see, we plant things close together and rather thick. Sometimes you have to step on something to harvest because of the crowded conditions. It is almost like one giant bed once everything grows to maturity. 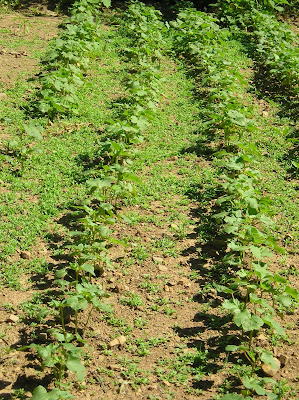 Here is the okra in June. Like those nice straight rows? I plant things just far enough apart to till a few times with this small Mantis tiller. Then the plants grow large enough to cover most of the surface of the soil and help keep down some of the weeds.

I always feel like everything should be farther along than it is. Kind of like a kid in a candy store - isn't there any okra yet? Isn't there any corn yet?

We learn so much every year we have a garden. We plant something new to see if it will produce well in this area and climate. Last year we planted five different kinds of winter squash. It was dreadfully hot and dry so it was a challenge for the plants. Two of them, buttercup and cushaw, did well despite the weather, so we will plant them again this year. We have grown black-eyed peas before, but not purple hull, so we can compare their hardiness and productivity.

The list of things to learn goes on and on and on. Again, take time to learn something that will benefit you and your family every day. It may turn out to be one of the most important things you have ever done.